BEATLES CONSPIRACY: DID THEY COVER UP PAUL'S 1966 DEATH?

October of 1969, three weeks after the Beatles' celebrated Abbey Roadalbum was released, WKNR-FM's Russ Gibb took a call from a man who identified himself only as "Tom." The Detroit deejay listened as the caller carefully laid out clues hidden in Beatles' songs and album art, which he said indicated Paul McCartney had died on November 9, 1966, in an automobile accident. Listeners began deluging New York City radio stations with "evidence" and soon the rumor spread around the world. Was this a Beatles' publicity stunt, a fan feeding-frenzy fueled by clues left as an inside joke by John Lennon—or was Paul really dead? 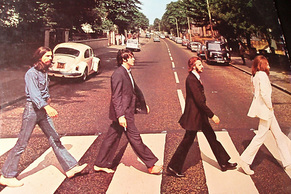 On the cover of the last album that the Beatles recorded, Abbey Road, the band is photographed crossing Abbey Road in London, outside of British music company EMI's Abbey Road Recording Studios. Paul is out of step with the other Beatles, barefoot and with his eyes closed. In many countries, including England, bodies are buried shoeless. Also, the way that the Beatles are dressed on the cover is said to have this meaning:
Lennon in white - the preacher
Starr in black - the undertaker
"McCartney" in a suit and barefoot - the corpse
Harrison in blue jeans and work shirt - the grave digger 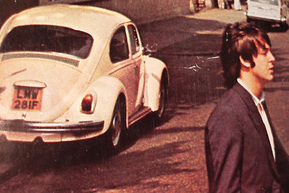 in the background on the Abbey Road cover is a Volkswagen with the possibly cryptic message, "28 IF," on its license plate. Proponents of the Paul-is-dead school take this to mean that had Paul McCartney lived, he would have been 28 years old. Life magazine quoted Paul (the real one or the substitute?) as explaining, "On Abbey Road we were wearing our ordinary clothes. I was walking barefoot because it was a hot day. The Volkswagen just happened to be parked there." 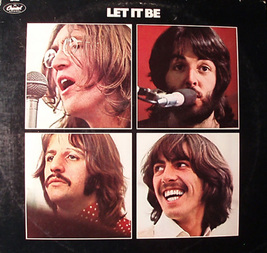 Let It Be was the second-to-last Beatles album to be recorded, but the last to be released. On the cover, Paul is the only Beatle whose face is partially obscured (by a microphone). He is also the only one not photographed in profile and with a white background. Paul's background is blood red. 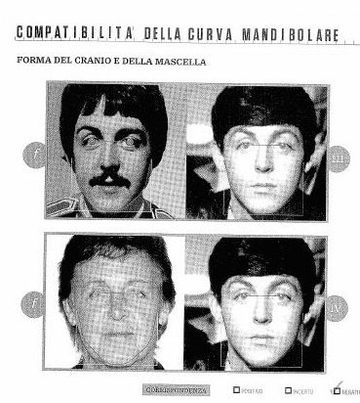 For example, the frontal curvature of the jaw was different (i.e. the curve going from one ear to the other and passing through the chin, which you see when looking directly into a face, as in the photos on the right) and the jaw arc was also different (i.e. the curve of the jaw that you would see if looking downward at the head from above). More interesting is the position, relative to the skull, of the point where the nose detaches from the face, because it can not modified by surgery. According to Carlesi, these points for Paul and Faul are considerably different. 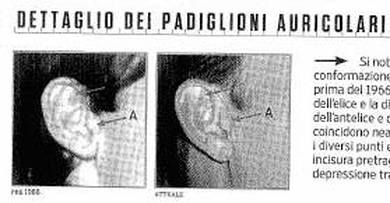 Some features of the ear are also useful for identification purposes because these as well are not modifiable through surgery. Carlesi and Gavazzeni determined that the ears of Paul and Faul differed significantly. 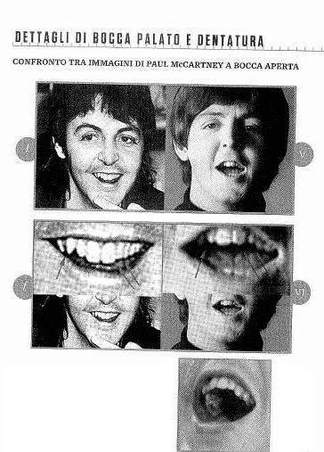 Some features of the human body can be altered, such the position and slope of teeth (dental braces do this for millions of people).Carlesi noticed that the teeth configurations for Paul and Faul do not match, but in a very curious way.

In Paul's mouth, his upper right canine tooth is pushed out of its normal position because there is not enough room in his jaw for all of his teeth to fit properly.

In Faul's mouth, that same canine tooth is also crooked, but there is  plenty of room in his jaw for all of his teeth. Since no other teeth are pushing against the crooked tooth, how did that tooth become crooked?

Carlesi concludes that the crooked tooth in Faul's mouth was the result of a dental operation to simulate the crooked tooth in Paul's mouth.
In 1962, when the Beatles were living in Hamburg, Germany and still unknown to most people, Paul McCartney had a brief affair with a German woman named Erika Wohlers. She gave birth to a daughter, Bettina, in December 1962, which was during the time the Beatles were starting to become famous. The Beatles soon left Germany, and McCartney abandoned Erica. Around 1967 McCartney agreed to pay 30,000 deutsche marks to support Bettina, but he was not admitting to being her father, even though she claims her German birth certificate identifies him as her father!

Once Bettina became an adult, she asked a German court to have McCartney recognize her as his natural daughter. McCartney had to submit to a DNA test, and the test showed that he was not her father. Interestingly, based on an autograph signed by McCartney, together with some photos taken for the occasion, Bettina accused the person who took that DNA test of being a substitute for Paul, not the real Paul McCartney! The autograph, for instance, was signed by somebody right-handed (Paul was left-handed). 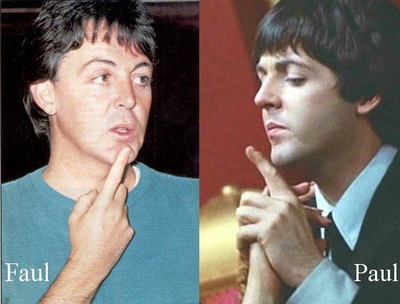 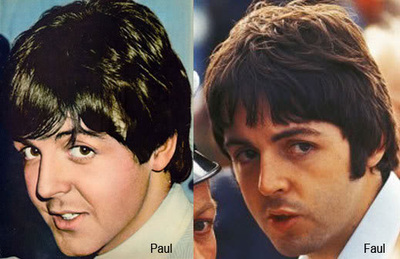 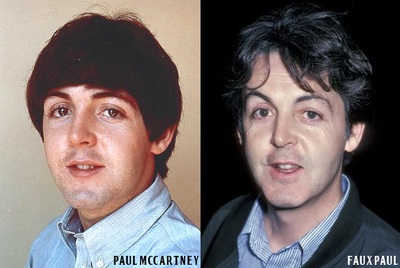 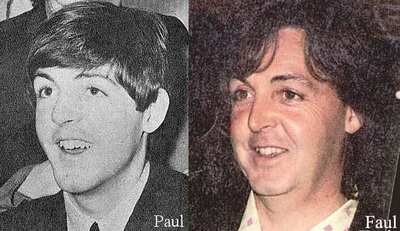